You are here: Home / All About Sunfish / Registry Records of Ownership

This brief history is derived from Registry Office records and is concerned with the ownership of the 60 acres of land and 4 acres 1 rod and 10 perches of land covered by water purchased by Albert F. M. Wilson in 1953. The history covers the period of time from the Crown Grant to The Canada Company in 1838 to the grant from Frank and Anna Psutka to Mr. Wilson in 1953.

The land, known as Lot 2, Concession 3, Block “B” in the Township of Wilmot, in the County of Waterloo and Province of Ontario was originally surveyed in the summer of 1823 at which time it was ascertained that the lot contained 124.2 acres of land and completely enclosed a lake. The sides of the lot were established trending N. 38° 30′ W., the southern end N. 78° 30′ E., and the northern end N. 84° 34′ E. The original surveyor’s title reads:

Map of Surveying and Laying Out
of the
Crown Reserved Blocks Remaining Unsurveyed
in the
Township of Wilmot in the District of Gore
For the Canada Company Pursuant to an Order from
The Hon. Thomas Ridout
Surveyor General of the Province of Upper Canada
Dated the 3rd May, 1828
And Most Obediently Executed
John Goessman
At York the 6th Oct, 1828.

The original Crown Grant dated 1838 is not preserved in the R.O. but undoubtedly granted the land in fee simple to The Canada Company subject only to the reservation of all white pine trees “that shall or may now or hereafter grow or be growing”, all “mines of Gold, Silver, Tin, Lead, Copper, Iron and Coal” and that all persons who, in the future, own this land shall within 12 months declare their allegiance to the crown (assuming that these crown grants were the same as those of the Townships of Waterloo and North Dumfries). 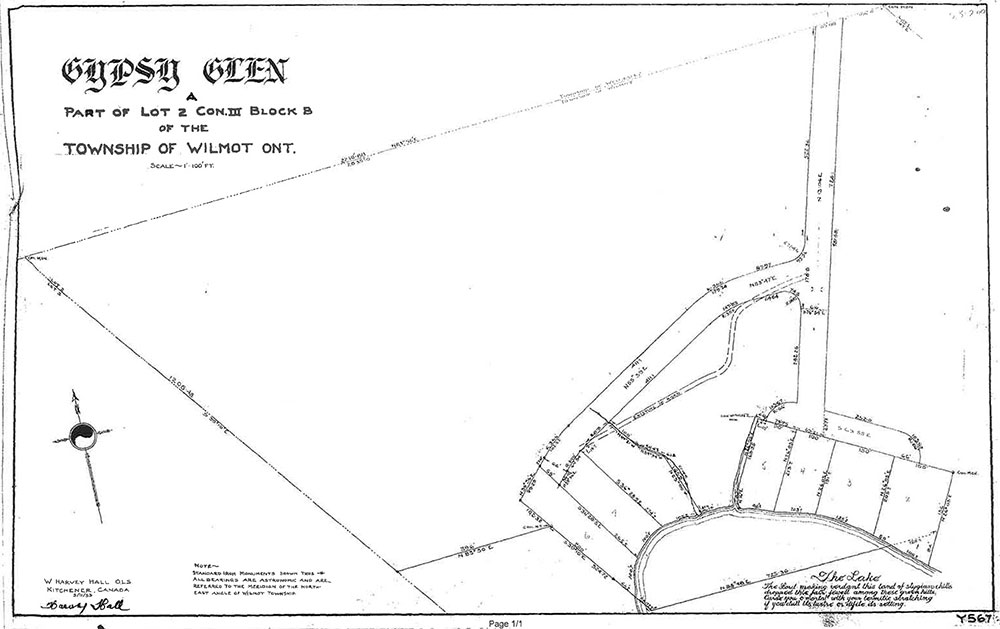